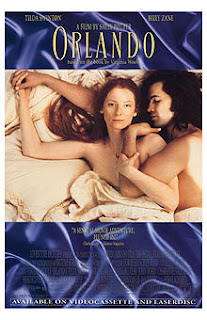 Sally Potter's Orlando is a different kind of film from most others. It highlights the subject of gender in a way different from other films. Yet it stays to the conventions of the type of film it is (a period piece).

Now I haven't read Virginia Woolf's novel nor have I seen any of Potter's other films, but I could tell that this was an unique idea. An ageless human who lives life as both a man and a woman? Sounds like a compelling story.

Potter gives her audience a film that has a balance of decadence and simplicity. However, the balance isn't a very even one. Sometimes the decadence is too much while other times the simplicity isn't enough. Still, it's the work from the film's star that can make it work.

The star in question is Tilda Swinton, who is rapidly becoming a favorite actress. It seems fitting that she would be in a film like Orlando. This is the kind of film that can show the world what kind of talent an actor has. In fact, Orlando may contain Swinton's best performance.

As mentioned above, Orlando is a very different kind of film. It feels flimsy in some parts but it's thanks to Swinton's performance that makes the film still remembered today. If you like unconventional films, then you'll like Orlando.

My Rating: ****
Posted by MovieNut14 at 9:38:00 PM
Email ThisBlogThis!Share to TwitterShare to FacebookShare to Pinterest
Labels: 1990s, directed by women, movies, reviews