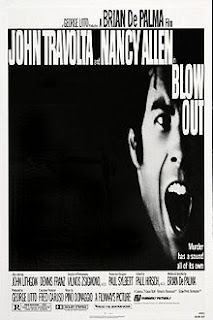 What is it about conspiracy films that keep the masses enthralled? Is it the mystery lurking beneath the secrets, just waiting to be revealed? Is it the people trying to solve the mystery? Those trying to keep it hidden? Regardless of the reason, it captivates audiences.

Brian De Palma's Blow Out is another film of the genre. Knowing De Palma's certain style, it comes as no surprise that there are allusions to Alfred Hitchcock throughout the film. But there's more than just the occasional shout-out to the Master of Suspense.

There are also allusions to (at the time) relatively recent events in politics. (The car crash that moves the film's events forward could be a sly reference to the Kennedy incident at Chappaquddick.) There's also nods towards both Watergate and the JFK assassination. Intentional? Most likely. Interesting? Most definitely.

The star of Blow Out is John Travolta, hot off the success of Saturday Night Fever and Grease. Here, he's far from busting a move. (There's a line I'd never thought I'd type.) He's determined to find the truth, even after the police insist there's nothing to the "accident". (John Lithgow's work here also deserves a mention.)

All in all, Blow Out is good but it loses steam after a while. It is a good De Palma film (the only others I saw were The Untouchables and Carlito's Way), I'll say that. Basically if you want a pretty solid film from the 1980s, here's your film.