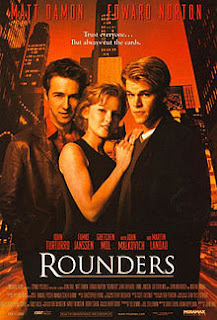 We've all seen those films. Guy's in dire need of money, so what's his best solution? Why, go to Vegas and play poker of course. It's a cliche, certainly, but it's kept people coming to the movie theater regardless.

Now John Dahl's Rounders continues that trend minus the trip to Vegas. What the film succeeds in is showing the desperation of the two leads as they try to get enough money to keep themselves alive. (Oh, and I don't normally do this, but here's another review that I liked.)

Now onto the rest of my review. I'm not much for films of this nature and the plot for Rounders is rather flimsy. But the ranging performances from the primary actors make the film work somewhat. (I say "somewhat" loosely.)

The actors include Matt Damon, Edward Norton (both recently recognized for their work in Good Will Hunting and Primal Fear respectively), John Turturro and John Malkovich (who speaks with the most ridiculous Russian accent possible). Damon has the most substantial role of the quartet but Norton is the scene stealer of the four. (He did have that tendency early on in his career.)

Anyway, Rounders is an all right film. Not great but there were a few good moments here and there that I liked. Norton, as stated above, steals basically every scene he's in whereas Damon gives a good performance. It's not much to go by but it's worth a look at least.

My Rating: ***1/2
Posted by MovieNut14 at 11:34:00 PM
Email ThisBlogThis!Share to TwitterShare to FacebookShare to Pinterest
Labels: 1990s, movies, reviews