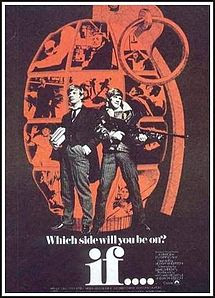 It's always a good sign when a film made decades ago is still relateable today. It could be something simple like politics or certain perspectives on the world. It's not too common but it's nice to see it happen.

In regards with Lindsay Anderson's If...., the subjects in question are the school environment and its effects on students. Nowadays the effects are from bullying by fellow students but in If...., the bullying is mostly done by the teachers. (No surprise that the aftermath of said bullying caused a bit of a stir back when it was released.)

It also comes as no surprise that this was released during a time where expression through violence was common. This year was 1968, a time during an ever-changing decade where political assassinations and anti-war protests ruled the headlines. Many films tried to keep their audiences' minds off recent events, but Anderson has his audiences very much acknowledge the chaos outside the movie theater.

As with every film, it takes the right actor to make the whole thing work. For If...., the actor Anderson chose to lead his film was Malcolm McDowell in his film debut. He may not look that much of a trouble maker, but there's that look in his eyes that suggests otherwise. (Is it any wonder that it was this film that convinced Stanley Kubrick to cast McDowell in A Clockwork Orange?)

If.... is a very compelling watch. Seeing people slowly getting pushed to their breaking point...it's just fascinating to watch. Some scenes don't entirely work, but Anderson certainly shows he knows what he's doing.