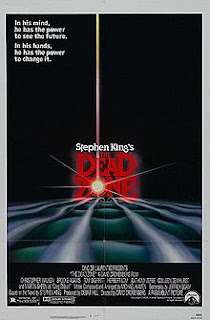 David Cronenberg is certainly a diverse director. He's dabbled in a number of genres: psychological horror, gross-out horror, surreal drama and not-so-domestic drama. I personally prefer the latter category, but many prefer the first two.

His 1983 film The Dead Zone fits somewhere between the first and third categories. Based on the Stephen King novel, the film chronicles a man's life following a debilitating car crash. (Amusingly, this was years before King's own.)

Many of Cronenberg's films from the 1980s focused on the surreal nature in life. (Videodrome, The Fly and Dead Ringers are the main contributors.) The Dead Zone isn't any different from those titles. It shows how strange life can become for some.

The star of The Dead Zone is Christopher Walken, who is actually the kind of actor Cronenberg would cast for one of his films. (Seriously, just look at him.) Not long after his deserved Oscar win for The Deer Hunter, Walken continues to show his abilities as an actor. There are many times throughout the film where he's just absolutely scared of what he's seeing, and Walken displays it fantastically.

Despite the work from Walken and the many unsettling elements early on, The Dead Zone feels like something's lacking by the end. I'm not sure what it is though. Of the Cronenberg films I've seen, this felt like the weakest among them. Oh, and there's also a really sleazy performance out of Martin Sheen too.