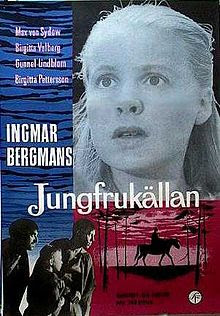 I'm not much on religion or thoughts of morals. And yet with certain films, my mind tends to rush to those very topics. I'm not sure why that is.

I felt this way as I watched Ingmar Bergman's The Virgin Spring. Is murder justifiable for the right reasons? Can He forgive someone for deeds they have done? Bergman asks such question and more.

Some might know this more as the film that was a key influence for Wes Craven's The Last House on the Left. (Those people, in my opinion, are ignorant.) Those that prefer to acknowledge the film as an individual achievement have gone down the better route.

Along with Bergman's direction, it's the notable details that make The Virgin Spring what it is. Of them, the most crucial ones are Max von Sydow's spellbinding performance and Sven Nykvist's haunting cinematography. Both capture the dark mood of the film, and the running theme of right and wrong.

What Bergman captures in The Virgin Spring is the questioning of morals, what drives someone to do something. A number of later films have done the same task on a more melodramatic level. Only Bergman could do this on an honest note. And this is with many of his films, not just The Virgin Spring.