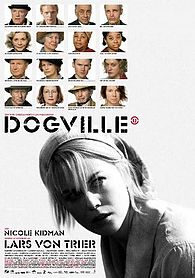 Everything has two sides. What may look trusting is actually harmful. Good is actually evil. In short, looks can be deceiving.

This definitely is the case with the titular town of Lars von Trier's Dogville. Narrated with dry irony by John Hurt, the film is von Trier's perspective on capitalism. And it's not a pretty portrait.

The cast is practically one for the ages. Of the names in Dogville, the more prolific ones include Nicole Kidman, Paul Bettany, Lauren Bacall, Patricia Clarkson, Stellan Skarsgard, Chloe Sevigny, Philip Baker Hall, Ben Gazzara and James Caan. Each actor plays their part extremely well, but the best comes from Kidman and Bettany, the only selfless people in the town of Dogville.

Tom (Bettany) is the only person in town who welcomes Grace (Kidman) with open arms. The other residents reluctantly accept her when she starts helping with menial chores, though their treatment towards Grace could be compared to that of a slave. The chores become more demanding and eventually take a sexual nature. What will happen next?

I was aware that von Trier's reputation of making controversial films tended to leave a lasting impact on those that dared to watch them. Hard to watch in some scenes, yes, but Dogville isn't as risky as I thought it would be. The way the film is set up is very clever and unique. Oh, and I just love the many expressions playing across Kidman's face in the final moments.