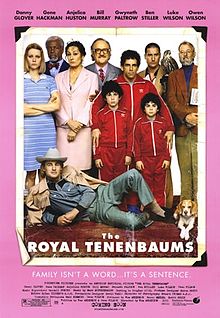 Admit it. You're part of an eccentric family. (I know I am.) It's always great fodder for literature and Hollywood.

Hey, Wes Anderson definitely thought so when he made The Royal Tenenbaums back in 2001. It's practically a story J.D. Salinger never wrote. (I read The Catcher in the Rye. I know what his writing style was like.)

I've seen all of Anderson's work sans Moonrise Kingdom, and I can safely say that Fantastic Mr. Fox and The Royal Tenenbaums stand out from the rest solely because the eccentric nature of both films is very much accepted. Fantastic Mr. Fox because it's an animated film, The Royal Tenenbaums because the eccentric behavior is evenly distributed among all of the characters, not just one or two of them.

Speaking of the characters, there's a motley crew of a cast. Of the names, there is Gene Hackman, Luke Wilson, Gwyneth Paltrow, Ben Stiller, Anjelica Huston, Danny Glover, Owen Wilson and Bill Murray. I absolutely love Murray's dry commentary, but this show belongs to Hackman. (My favorite scene of his is the montage of his day out with his grandsons.) I now understand why so many people were offended at the lack of an Oscar nomination for him.

In short, I loved The Royal Tenenbaums. It just flows so well. Every actor plays their role excellently, Hackman especially. Definitely one of the best films of the last decade.