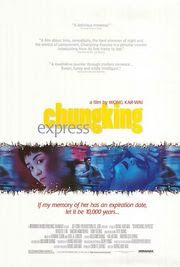 Don't you love it when you watch that one film responsible for getting an actor or a director recognized by the masses? It's such a wonderful feeling.

Wong Kar-wai's Chungking Express is one such example. Focusing on the lovelorn and the lovesick, the film captures life in a bustling city.

Chungking Express is reminiscent of Woody Allen's Manhattan. Both films focus strictly on certain individuals in a large city, all only faintly connected. The sole connection between the main characters of both films in something simple: love.

Another connection between Chungking Express and Manhattan is the cinematography. It shows the cities as characters in themselves. Manhattan shows New York City in a seductive black and white setting; Chungking Express is shot in color to show the vivid shades of Hong Kong.

Much how I very much enjoyed In the Mood for Love, Chungking Express knows how to underplay the love between the characters. (Wong is a master at that from what I've seen so far.) Also, I just love films where the city is a character as well.