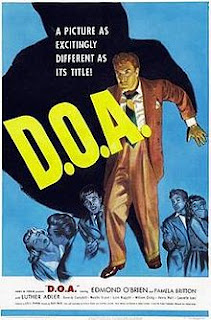 In the opening moments of Rudolph Mate's D.O.A., a man walks into a police station and announces he wants to report a murder. When asked who was the victim, his response stuns the officers: "I was."

The man is Frank Bigelow (Edmond O'Brien). Away from business for a week, he hopes to get his mind off his troubles. But someone slipped poison into his drink, and it's up to him and him alone to find out who did such a thing.

The question remains: why would anyone do this to an innocent man? Does Frank have a few skeletons in the closet? It seems likely judging by how some people look at him. But these secrets I shall keep hidden for the sake of surprise.

It's a bit confusing if you don't pay attention but still a very well done film. It's not as great as the other noirs of its era, but it's as clever as them. Worth a look.

My Rating: ****
Posted by MovieNut14 at 11:27:00 PM
Email ThisBlogThis!Share to TwitterShare to FacebookShare to Pinterest
Labels: 1950s, movies, reviews