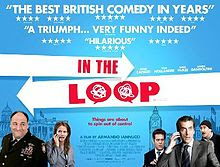 Usually when people go to the movies, they do so to escape their troubles and their everyday lives. Though I think Mad summed it up nicely in a comment on another blog: "...going to the movies isn't always about escaping our own lives but giving it perspective."

I suppose what Mad said could be applied to politics and the media. A film that focuses on these topics is Armando Iannucci's In the Loop. Having studied the effects of mass media several times in the past few years, I know what's depicted in the film is fairly accurate.

Of course I'm not well versed when it comes to politics, but In the Loop provides a sort of commentary to those unfamiliar with their own government. (Sure helped me a bit.) Believe me, it could be subtitled "Politics for Dummies".

Oh, and that script is to die for. It has bite in every line, something that if you know me enough I just adore. Think of it as a political satire by Quentin Tarantino minus the violence (and plus the British).

In the Loop is one of the most clever films of the last decade. Can you honestly go wrong with a script like that? In a word, no.

My Rating: ****1/2
Posted by MovieNut14 at 10:53:00 PM
Email ThisBlogThis!Share to TwitterShare to FacebookShare to Pinterest
Labels: 2000s, movies, reviews