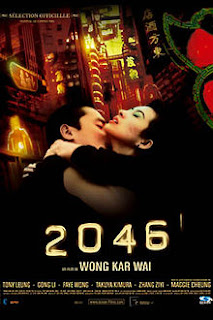 A director I've recently taken a shine to is Wong Kar-wai. I was very much impressed by In the Mood for Love and Chungking Express, mainly for how Wong underplayed feelings of romance and passion. If only more directors were like him.

I checked out 2046, which is more or less a sequel to In the Mood for Love. Picking up where the last film left off, the film shows the interactions between Chow (Tony Leung, who is slowly becoming a favorite foreign actor) and the women staying at his hotel. The encounters garner both emotional and physical intimacy.

Chow isn't as quiet and reserved as he was in In the Mood for Love, but he's just as lonely. The many sexual encounters he has throughout the film are mainly as a means of acceptance rather than desire. Though he does develop feelings for one woman, he decides to remain silent on those matters, reasons only known to him.

Though not as poetically flowing as In the Mood for Love, 2046 has its own charm. I will say the score by Shigeru Umebayashi is perhaps the most gorgeous score I ever heard. All in all, a very well done follow-up.