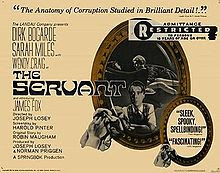 Early in Joseph Losey's The Servant, there's a shot of Hugo Barrett (Dirk Bogarde) sitting alone. The smoke of his cigarette floating before him, there's a slight look of deviousness in his eyes. One wonders what's running through that mind of his.

His employer Tony (James Fox) is very much the opposite of Barrett. Brash, lazy and arrogant, he makes it clear that he is in charge of the household. He is a bit manipulative, but that doesn't mean he can't be manipulated.

Halfway through the film, something happens. The roles of master and servant get blurred. Who's in charge and who's getting ordered? It becomes hard to tell.

As well as the work from Bogarde and Fox, the cinematography by Douglas Slocombe is a sight to be seen. From the deep focus interior shots to the exterior shots of British life, Slocombe captures both a beauty and an ugliness of society. He also captures the mood of a scene as shown marvelously in the final scene.

I still stand by the fact that his best work is in Victim, but Bogarde's work in The Servant is just as great. Fox is also great, displaying a very layered performance. Losey depicts a society where class status doesn't matter; having no scruples does.

My Rating: *****
Posted by MovieNut14 at 11:36:00 PM
Email ThisBlogThis!Share to TwitterShare to FacebookShare to Pinterest
Labels: 1960s, movies, reviews