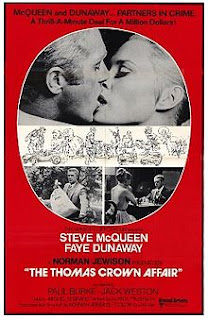 Norman Jewison's The Thomas Crown Affair has everything most crime capers of today try so hard to capture. It's sleek and sexy, two adjectives that best sum up most star vehicles of the 1960s.

Steve McQueen stars in the title role of Thomas Crown, a bored businessman. Like his earlier roles in The Great Escape and The Magnificent Seven, McQueen makes it clear early on that he is in charge. Crown is collected in every scene, never hinting at a change in personality. Hey, he is played the King of Cool after all.

Faye Dunaway co-stars as Vicki Anderson, an insurance investigator working on the case of the bank robbery Crown planned meticulously. Like her Oscar-nominated roles in Bonnie and Clyde, Chinatown and Network, Dunaway plays Vicki as a fiercely independent woman. She thinks for herself rather than be influenced by others.

The combination of both creates a spark like no other. McQueen's natural charm and Dunaway's cold appeal go excellently together. When people say opposites attract, they ain't kidding.

The Thomas Crown Affair in toll is clever filmmaking at work. Along with its two glamorous leads, it displays enough innuendos to make anyone blush. (The infamous chess game is the creme de la creme.) John McTiernan remade it several years back, though I doubt he recaptured what Jewison put in the original.