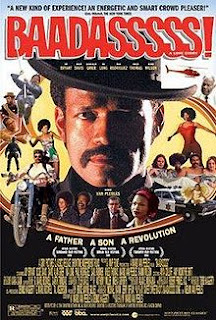 In 1971, Melvin Van Peebles released Sweet Sweetback's Baadasssss Song, perhaps the most famous blaxploitation film ever made. (Well, along with Shaft.) Thirty-two years later, Melvin's son Mario made Baadasssss!, chronicling the production of the film from sketching out the idea to the troubled filming to the insane aftermath.

Van Peebles doesn't shy from his father's flaws, which includes Melvin (Mario Van Peebles) directing a 13-year-old Mario (Khleo Thomas) in a sex scene. Among Melvin's behavior, there's arguing with his crew and studio executives, struggling with money problems, and trying to break new ground with his filmmaking while at the same time trying not to get arrested.

Though Van Peebles shows a vulnerable side in his father. Melvin tries hard to be a good father and fails in doing so. (That sex scene featuring a young Mario pretty much sealed the deal.) The look of dejection on Melvin's face when he thinks his film is a failure upon its premiere shows just what Van Peebles wanted to depict: a man overwhelmed by the ways of his society.

Baadasssss! is one of the few films about a real life film production that just radiates. Van Peebles also captures the whole ambiance of 1970s counterculture, the very thing that fueled the most influential film era in history.

My Rating: ****1.2
Posted by MovieNut14 at 10:35:00 PM
Email ThisBlogThis!Share to TwitterShare to FacebookShare to Pinterest
Labels: 2000s, movies, reviews