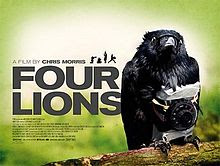 The opening moments of Christopher Morris' Four Lions displays how incompetent the protagonists are. They don't get much smarter as the film progresses, but the scale of the humor does.

Indeed the leads aren't exactly dumb (well, with the exception of one of them), but they're not the brightest crayons in the box either. They try to prove themselves as legit terrorists, but all they do is the complete opposite of that.

You can't blame them for trying. (You can blame them for being bloody ignorant when it comes to trying to stay incognito.) They're probably only doing all of this for attention, but no one knows except for them.

What makes Four Lions funny is its script. Without it, the whole film probably would have fallen apart. Hey, for every comedy, there has to be a good script. (That should be a requirement in Hollywood to be honest.)

Four Lions is very good. There are a number of moments that are laugh out loud funny, some of them inappropriately. Still, it's very entertaining.