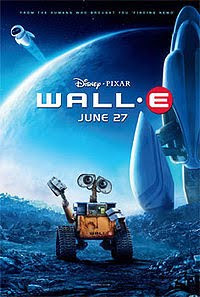 I don't usually watch animated movies because a majority of them are completely ridiculous. But often when I need an animation fix, I turn to the people of Pixar to deliver a good movie.
WALL-E (Ben Burtt) is a robot that is designed to clean up the garbage-covered Earth in the year 2805. After spending seven hundred years alone, WALL-E starts to become lonely. Enter EVE (Elissa Knight), a robot scout from outer space. A romance soon forms.

I stated on an earlier post that WALL-E was my favorite movie of the 2000's. I stated my reasons on that post, but it wasn't good enough. Here are my actual reasons: it's visually stunning and it tugs at the heartstrings. In some ways, it's like 2001: A Space Odyssey for kids.

My Rating: *****
Posted by MovieNut14 at 6:01:00 PM
Email ThisBlogThis!Share to TwitterShare to FacebookShare to Pinterest
Labels: 2000s, movies, reviews