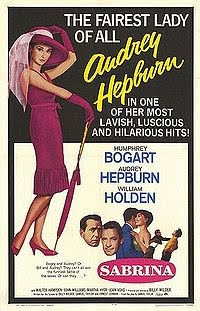 The 1954 movie Sabrina marks a few things for me. It's the seventh movie I've seen directed by Billy Wilder, as well as the sixth with Humphrey Bogart and the fourth with William Holden. But it's the first movie I've seen featuring the always elegant Audrey Hepburn.

Linus (Bogart) and David Larrabee (Holden) are the two sons of a very wealthy family. Linus is all work -- busily running the family coporate empire, he has no time for a wife and family. David is all play-- technically he is employed by the family business, but never shows up for work, spends all his time entertaining, and has been married and divorced three times. Meanwhile, Sabrina Fairchild (Hepburn) is the young, shy and awkward daughter of the hosehold chauffeur, who has been infatuated with David all her life, but David hardly notices -- "doesn't even know I exist" -- until she goes away to Paris for two years, and returns an elegant, sophisticated, beautiful woman. Suddenly, she finds that she has captured David's attention, but just as does so, she finds herself falling in love with Linus and vice versa.