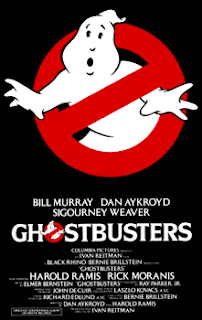 In my opinion, I believe that movies released in the 1980's were more focused on making money than pleasing critics. But a few managed to do both. One good example is the 1984 sci-fi flick Ghostbusters.

Peter Venkman (Bill Murray), Ray Stantz (Dan Aykroyd) and Egon Spengler (Harold Ramis) are three scientists at Columbia University in New York City. When their grant expires, the guys are fired and they go into business as a ghost extermination company called "Ghostbusters". Their first customer is orchastra cello player Dana Barrett (Sigourney Weaver), who was scared out of her apartment on the 22nd floor of a high rise apartment building on Central Park West. It seems that Dana's neighbor Louis Tully (Rick Moranis) is also being affected by the strange happenings in the apartment building. Armed with proton guns, the Ghostbusters become wildly popular and they are joined by Winston Zeddemore (Ernie Hudson), who is looking for a job with good pay.

Man, that had to be an awesome movie to see on the big screen. Who would've thought that comedy and sci-fi mixed so well?