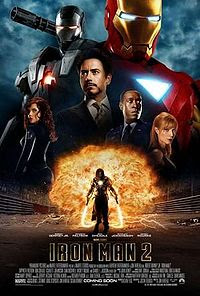 You know how some movies have all this hype that continually builds up until the release date? It can do one of two things: 1) the hype lives up to the expectations of many and the movie becomes the biggest hit of the year (ie The Dark Knight) or 2) the hype falls flat on its face (ie Indiana Jones and the Kingdom of the Crystal Skull). Thankfully for Iron Man 2, it falls in the former.

With the world now aware of his dual life as Iron Man, Tony Stark (Robert Downey, Jr.) faces pressure from the government, the press and the public to share his technology with the military. Unwilling to let go of his invention, Stark, along with Pepper Potts (Gwyneth Paltrow) and James Rhodes (Don Cheadle) on his side, must forged new alliances -- and confront new enemies.

I saw an interesting comparison between Stark and rival Justin Hammer (played to perfection by Sam Rockwell). Both are attention-hungry narcissists, but their means of having attention are different. Hammer likes attention as a means of power, while Stark likes attention because he knows he's doing the right thing (part of the time, anyway).

Much like Batman Returns, there are a lot of more supporting characters than the first film. Unlike Batman Returns, however, it works. Mickey Rourke is a rather believable villain, Scarlett Johansson is good, and Cheadle is an interesting replacement for Terrence Howard. Although it does lag a little, it's still a freakin' awesome movie.

My Rating: ****
Posted by MovieNut14 at 1:16:00 PM
Email ThisBlogThis!Share to TwitterShare to FacebookShare to Pinterest
Labels: 2010s, movies, reviews