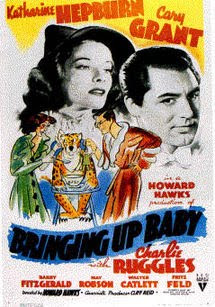 There's a blog I frequently read whose author has an infatuation with movie legend Katharine Hepburn. Since last November, I've seen three of her movies. Those movies are The Philadelphia Story, Guess Who's Coming to Dinner and Bringing Up Baby, the latter I'll be reviewing.

When scatterbrained Susan Vance (Hepburn) takes a shine to palaeontologist David Huxley (Cary Grant), mayhem ensues. David, engaged to be married and intensely interested in the arrival of the brontosaurus bone required to complete his project at the museum, is inetricably bound up with Susan's escapades when she finds herself responsible for Baby, a tame leopard shipped to her New York apartment and intended for Susan's aunt in Connecticut.

Although I liked it in some parts, my tolerance level for a majority of it was low. It was too screwball for me to really like it. I did like the chemistry between Grant and Hepburn though. But if you're interested in a good comedy, Bringing Up Baby is a fine choice.