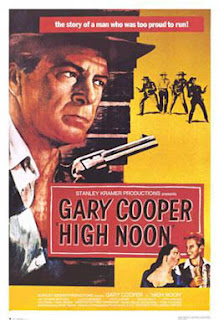 I will admit I haven't seen a Western with Clint Eastwood. But I have seen a Western, three in fact. Those three are Red River, Once Upon a Time in the West and High Noon, the latter I'll be reviewing.

On the day of his retirement and his marriage to Amy (Grace Kelly), sheriff Will Kane (Gary Cooper) receives news that Frank Miller (Ian MacDonald), an outlaw Kane brought to justice years before, is coming to get his revenge on him. As others lose hope for him, Kane prepares himself for the worst.

If Fred Zinnemann knew that he would have directed one of the most influential Westerns in movie history, he would've been stunned by the impact of High Noon. The tension throughout is so thick, you could cut it with a knife. Cooper delivers a memorable performance as the determined Kane.