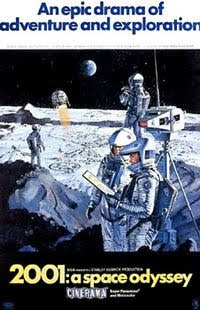 I give Stanley Kubrick points for venturing into different genres. He has done horror (The Shining), war (Paths of Glory, Full Metal Jacket) and sci-fi (A Clockwork Orange, 2001: A Space Odyssey), to name a few.

When a large black monolith is found beneath the surface of the moon, the reaction immediately is that it was intentionally buried. When the point of origin is confirmed as Jupiter, an expedition is sent in hopes of finding the source. When Dr. David Bowman (Keir Dullea) discovers faults in the expeditionary spacecraft's communications system, he discovers more than he ever wanted to know.

Throughout the movie, I'm trying to piece together what the plot is. But then I just gave up trying and just watched it. Visually stunning and beautiful musical score, 2001: A Space Odyssey is worth seeing for those who are cinephiles or those who want to see an interesting movie.