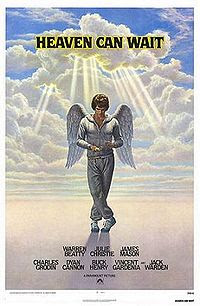 It's always interesting to see what happens with a director's career after their debut. Take as an example Warren Beatty. First he's directing the sports comedy Heaven Can Wait, then three years later he's directing the epic Reds which would later win him an Oscar for directing.

Los Angeles Rams backup quarterback Joe Pendleton (Beatty) is looking forward to helping his team get to the Super Bowl. However, he is involved in a road accident and is plucked from his body by an anxious first-time angel (Buck Henry). After finding out his body was cremated, Joe has no choice but to find a new body to inhabit. He finds Farnsworth, a millionaire who had been heavily drugged by his wife Julia (Dyan Cannon) and his secretary (and her lover) Tony Abbott (Charles Grodin). As Farnsworth, he falls in love with activist Betty Logan (Julie Christie).

I really like the comedic flow throughout, as well as the romance. Beatty's performance is both charming and appealing. Like what I said in the introduction, it's always interesting to see what happens with a director's career after their debut. Thankfully for Beatty, his career as a director skyrocketed after Heaven Can Wait.

My Rating: ****1/2
Posted by MovieNut14 at 5:10:00 PM
Email ThisBlogThis!Share to TwitterShare to FacebookShare to Pinterest
Labels: 1970s, movies, reviews