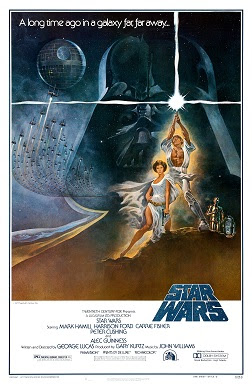 Forget what the critics say about 2001: A Space Odyssey being the greatest sci-fi movie ever made. For me (and I assume many others), Star Wars will always hold that title.

Luke Skywalker (Mark Hamill) dreams of something greater than his current position in life. One day, his life changes after encounters with robots C-3PO (Anthony Daniels) and R2-D2 (Kenny Baker). R2-D2 holds a message from Princess Leia (Carrie Fisher) for Obi-Wan Kenobi (Alec Guinness). This leads to a quest, which is joined by smuggler Han Solo (Harrison Ford) and his Wookiee co-pilot Chewbacca (Peter Mayhew), to save the galaxy.

I really envy those who saw it in a theater. The Death Star blowing up + big screen = the best time at the movies EVER. 1977 or not, the special effects don't look dated at all. I particularly like Ford's performance. Like I said, I love the rebel.

My Rating: *****
Posted by MovieNut14 at 9:37:00 AM
Email ThisBlogThis!Share to TwitterShare to FacebookShare to Pinterest
Labels: 1970s, director: George Lucas, movies, reviews