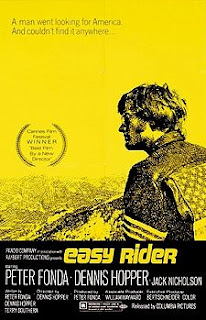 You know how the end of the 1960's for movies was like, "Screw this. We're going by our rules"? One execellent example is Easy Rider.

Friends Wyatt (Peter Fonda) and Billy (Dennis Hopper) buy drugs in Mexico and deal in Los Angeles, raising money to travel to Mardi Gras on their motorcycles. Their cross their country disclosing a period of counterculture and intolerance through spectacular landscapes.

Along with Easy Rider being a movie that went by its own rules, it also summed up an entire generation and its angst. Who would've thought that a movie made for $400,000 would become one of the most important movies of the 1960's?

My Rating: *****
Posted by MovieNut14 at 4:19:00 PM
Email ThisBlogThis!Share to TwitterShare to FacebookShare to Pinterest
Labels: 1960s, movies, reviews