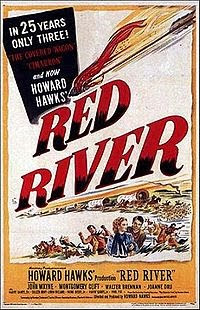 When the name John Wayne is mentioned, his performances in Westerns such as The Searchers and Stagecoach are usually thought of. But Wayne has made Westernsthat are frequently overlooked.

Thomas Dunson (Wayne) builds a cattle empire with his adopted son Matthew Garth (Montgomery Clift). Together they begin a massive cattle drive north from Texas to the Missouri railhead. But on the way, new information and Dunson's tyrannical ways cause Matthew to take the herd away from Dunson and head to a new railhead in Kansas. Dunson, swearing vengeance, pursues.

This was the first movie I saw featuring John Wayne. I like how the amount of action is at the right level. One of the writers called it "Mutiny on the Bounty with horses" (or something like that), which makes sense because, in essence, it is.