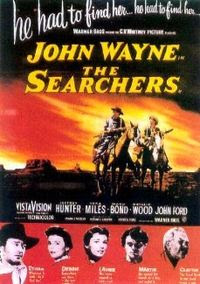 Long before Clint Eastwood became synonomous with kick-ass westerns, John Wayne held that honor. And today, many still believe he continues to hold that honor.

Ethan Edwards (Wayne), returning from the Civil War to the ranch of his brother, hopes to find a home with his family and to be near the woman obviously but secretly loves. But a Comanche raid destroys these plans and Ethan sets out, along with his 1/8 Indian nephew Martin Pawley (Jeffrey Hunter), on a years-long journey to find the niece kidnapped by the Indians under Chief Scar (Henry Brandon). But as the quest goes on, Martin begins to realize that his uncle's hatred for the Indians is beginning to spill over onto his now-assimilated niece. Martin becomes uncertain whether Ethan plans to rescue Debbie (Natalie Wood)...or kill her.

With this being only the second John Wayne movie I've seen (the first being Red River), I have managed to develop a greater appreciation for westerns. It's gripping from beginning to end and the action definitely delivers.