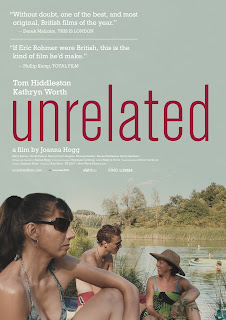 Joanna Hogg's Unrelated opens with Anna (Kathryn Worth) arriving at her friend's vacation home in Tuscany, a temporary escape from her crumbling marriage. The shot of her standing alone with her luggage establishes who she is: the outsider looking in.

Indeed there are a number of shots throughout Unrelated (keenly framed by cinematographer Oliver Curtis) that show Anna by her lonesome. Even when she's with other people, she's captured in a way that makes her look like she isn't welcome. This detail defines her character arc.

Unrelated also shows Anna's attempt to regain a sense of youthfulness during her vacation. She spends more time with her friends' children than them, and revels in their bouts of debauchery. But it's only a matter of time before reality kicks in for her.

Like many other women directors before her, Hogg chronicles the ever-present fear of aging found in fictional women. As with their real-life counterparts, they know that it's only a matter of time before they become less desirable. (Though here's a question: why is it that men are the only ones depicted in making the most of their mid-life crises?)

Unrelated isn't unique in its story but Hogg adds another chapter to a familiar story. A passage from Ford Madox Ford's The Good Soldier best sums up what Anna is going through: "We are all so afraid, we are all so alone, we all so need from the outside the assurance of our own worthiness to exist."

My Rating: ****
Posted by MovieNut14 at 11:20:00 AM
Email ThisBlogThis!Share to TwitterShare to FacebookShare to Pinterest
Labels: 2000s, directed by women, movies, reviews