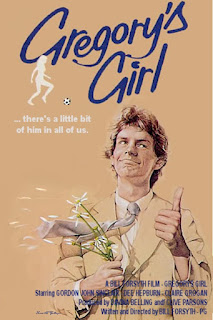 Ah, the coming of age genre. The one that examines the many awakenings one encounters during their youth. Frequently the main awakening is one of a sexual nature but sometimes (far the sake of reaching a wider audience) the tamer equivalent comes into play.

The latter is on full display in Bill Forsyth's Gregory's Girl. Focusing on the titular Gregory (John Gordon Sinclair) as he tries to survive sixth form, it's a step up from the numerous high school-set films of the 1980s in that there's more personality within the characters.

As Forsyth would do two years later with Local Hero, Gregory's Girl depicts an array of character types, showing that no two people are truly alike. (Casual side note there, aspiring writers.) But like his follow-up film, Forsyth has a sense of unity within these characters.

As stated earlier, Gregory's Girl was released at the beginning of an era of high school films, an era where young stars became household names. Sinclair, who was also in Forsyth's debut That Sinking Feeling, captures Gregory's many plights with ease. (And unlike the stars of most high school films, Sinclair was a teenager when he made the film.)

Gregory's Girl is an endearing work. It could make one nostalgic for their teenage years (as well as grateful that they're no longer living them). It's a title that one should seek out at least once.

My Rating: ****
Posted by MovieNut14 at 11:01:00 AM
Email ThisBlogThis!Share to TwitterShare to FacebookShare to Pinterest
Labels: 1980s, director: Bill Forsyth, movies, reviews