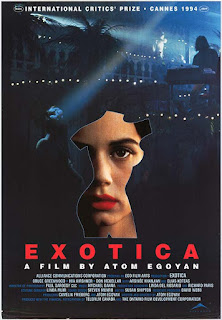 It's clear early on in Atom Egoyan's Exotica that it'll be a complex work. When we first see Francis (Bruce Greenwood), it's our insight into the minds of the film's characters. (And it's not so clean cut.)

Francis becomes fixated on exotic dancer Christina (Mia Kirshner) as does her ex-boyfriend Eric (Elias Koteas). As fiction often shows, fixation often leads to something unhealthy. And that in turn leads to something you can't take back. (Enflamed passions rarely result in anything good.)

Much like Egoyan's follow-up film The Sweet Hereafter, Exotica shines a light on people that at first glance have no real connection to each other. But Egoyan shows there's more than meets the eye. These supposedly unconnected characters have their own secrets and demons.

And also like The Sweet Hereafter, Exotica is a very layered film. What appears at first glance to be a story of broken people soon blossoms into an intimate portrait of discovery. (Even if said discovery leads to the dark corners of one's mind.)

Exotica is more than what the title implies. It's about broken people trying to heal but they wear their flaws on their sleeves. It depicts us as a species that would rather hide behind a mask of confidence than admit the truth. But to quote the final like of Some Like It Hot, nobody's perfect.

My Rating: ****1/2
Posted by MovieNut14 at 11:16:00 AM
Email ThisBlogThis!Share to TwitterShare to FacebookShare to Pinterest
Labels: 1990s, movies, reviews