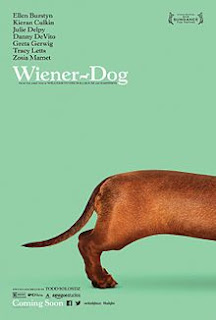 It's safe to say that those unfamiliar with Todd Solondz's work will be in store for some rude awakenings with his latest film Wiener-Dog. It has a blunt and very dark sense of humor to it. But as strange as this might sound, it also has some heart to it as well.

Well, the latter is to be expected given the plot (it follows a dachshund as it goes from owner to owner) but if you're familiar with Solondz's earlier films, it isn't so clean cut as it seems. But as the more adept filmmakers show with their works, there's more to the story.

Told through four vignettes (one of which has a connection to Solondz's earlier film Welcome to the Dollhouse), Wiener-Dog is a story set within middle class America. It depicts the everyday lives of your run of the mill people. But all of these characters have their aspirations, only for them to be cruelly crushed by reality.

But where does the element of heart come in? Indeed it's certainly not something one would expect from Solondz but it works here in Wiener-Dog. Even when all seems lost for some of the characters, there's that faint glimmer of possibility for them.

By no means should Wiener-Dog be your introduction to Solondz but that doesn't imply that you should avoid it altogether. An ideal choice for those who like their comedy as dark as ink. (And boy, it gets really dark in the final third.)

My Rating: ****1/2
Posted by MovieNut14 at 9:35:00 AM
Email ThisBlogThis!Share to TwitterShare to FacebookShare to Pinterest
Labels: 2010s, movies, reviews