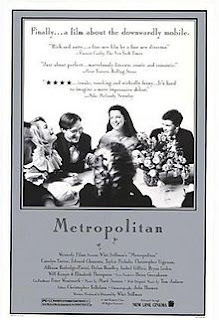 Frequently one's debut provides insight into what to expect from potential future works. Whether it's a recurring theme or a character type, it tends to establish the creator's sense of, well, creativity.

In regards with Whit Stillman's Metropolitan, it captures the difference in class and how they're perceived by the varying classes. (Basically it's The Great Gatsby in the era of yuppies.) Sure, it might sound borderline obnoxious but Stillman ensures that it isn't.

Within the small soirees of the Sally Fowler Rat Pack, Metropolitan depicts a group of people disillusioned by their own generation. (Hey, it's not just with this generation.) Bearing the weight of the previous one, they struggle to make names for themselves. (Who would've thought Stillman managed to foretell the millennials?)

As well as being a (then) contemporary version of The Great Gatsby, Metropolitan also has Jane Austen as an influence. The views on society, the varying romantic entanglements, how women are perceived...all are aspects commonly found in the author's works. (Apparently she left enough of an impact on Stillman for him to adapt one of her works twenty-six years later.)

Metropolitan may not be everyone's cup of tea (there are some moments reminiscent of your average Noah Baumbach film) but Stillman makes sure all of its 98 minutes work. (They do.) Now to see if his later films meet the same caliber...

My Rating: ****
Posted by MovieNut14 at 8:41:00 AM
Email ThisBlogThis!Share to TwitterShare to FacebookShare to Pinterest
Labels: 1990s, director: Whit Stillman, movies, reviews