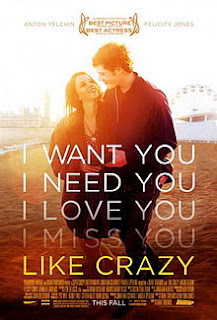 They say that absence makes the heart grow fonder. But Drake Doremus' Like Crazy shows, that's not always the case. If anything, the relationship between Jacob (Anton Yelchin) and Anna (Felicity Jones) starts to fracture whenever they're apart. But is there any hope for them?

Much like Blue Valentine released the year before, Like Crazy chronicles the rise and decline of a romantic relationship. And while not as stinging as Derek Cianfrance's film, there are moments in Doremus' film that pack a punch. (Safe to say that neither of these titles are ideal date movies.)

As proved with her Oscar-nominated performance in The Theory of Everything three years later, Jones shows her viability as an actress in Like Crazy. Anna's lines and behavior don't feel forced on Jones' part (a good thing, no doubt) as she manages a capable life. Hopefully this potential from Jones won't go to waste.

Sadly we were just beginning to see what Yelchin was capable of as an actor before his life was suddenly taken away from the world last month, leaving behind a number of "what if" scenarios. Would he have become an Oscar nominee (or even winner) had he continued with diverse projects? We may never know now.

Back to Like Crazy. It's a quiet examination on how fleeting young love can be. We think that once we meet that one person all other aspects of life will fall into place like pieces of a puzzle. But sometimes those pieces don't fit or they're from something else. (And boy, that last scene is a doozy.)

My Rating: ****1/2
Posted by MovieNut14 at 10:57:00 AM
Email ThisBlogThis!Share to TwitterShare to FacebookShare to Pinterest
Labels: 2010s, movies, reviews