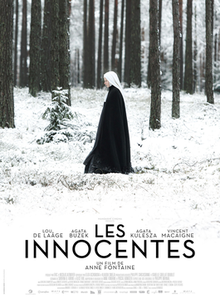 Set in the months after World War II's end, Anne Fontaine's The Innocents opens with Polish nuns singing hymns. The relative calm of this scene is shattered by a piercing scream somewhere else in the convent. It's this scene that establishes the film's unflinching nature.

There have been a number of films set in World War II's aftermath but The Innocents is different. Rather than the soldiers coming home after years of bloodshed, it focuses on the civilians who are still recovering emotionally from recent atrocities. And these are people that didn't have the resources to defend themselves.

What also makes The Innocents stand out is that its production crew is predominately female. Very seldom do films that are both harsh and gentle are made with a feminine touch. (Honestly, we need more films of such a nature.)

Fontaine and cinematographer Caroline Champetier capture some indelible images throughout The Innocents. Similar to Ida (which coincidentally also features Agata Kulesza), it focuses on the harsh outdoors and the (sometimes) more intimate interiors. It's a precise detail that only those more connected to the story they're creating will add.

The Innocents is a breathtaking piece of filmmaking. Each frame tells a story by itself but when combined, it leads to something stunning. Be sure to see this on a big screen just to take in Champetier's work.

My Rating: *****
Posted by MovieNut14 at 9:15:00 AM
Email ThisBlogThis!Share to TwitterShare to FacebookShare to Pinterest
Labels: 2010s, directed by women, movies, reviews