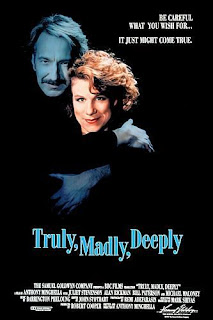 Sometimes there are those films that become hard to watch in light of an actor's passing. Dead Poets Society becomes more heartbreaking following Robin Williams' suicide as does the Liam Neeson storyline in Love Actually in light of Natasha Richardson's accident. A sense of discomfort passes through as we watch Philip Seymour Hoffman age in Synecdoche, New York.

In regards with Anthony Minghella's Truly, Madly, Deeply, it can be hard to watch Alan Rickman's performance now. Why? His character Jamie returns to his girlfriend Nina (Juliet Stevenson) after his death. But at the same time, there's an added sense of poignancy within Rickman's work.

With Truly, Madly, Deeply being a film about grieving, it shows how hard it can be for someone to move on after a loss. Some struggle to carry on as before, others resort to drastic means to numb the pain. But soon they learn to live with the loss.

Minghella also shows Truly, Madly, Deeply as a story on how hope isn't lost when all looks bleak. Yes, you may feel as though there's no end in sight to your pain. But just remember that while the good times might end suddenly, so too can the bad times.

Truly, Madly, Deeply shows how sometimes in grieving one tries their best to remember the deceased's better qualities. But the element of nostalgia may cast over the deceased's actual personality. There's nothing wrong in remembering the bad times as well as the good. After all, life is full of both of these.