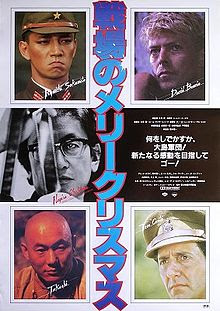 In contrast to his most infamous film In the Realm of the Senses, Nagisa Oshima's Merry Christmas, Mr. Lawrence is much more subdued in many ways. Certainly not the first thought that comes to mind when you see who's amongst the cast (two pop stars and a Japanese comic actor). Yet Oshima makes it work.

The pop stars in question are David Bowie (as a prisoner of war) and Ryuichi Sakamoto (as the commandant) while the comic actor is Takeshi (as a brutal guard). These bits of eclectic casting might seem strange at first glance but Oshima utilizes all three of them to the fullest extent. (As he does with Tom Conti as the titular Mr. Lawrence.)

Set at a Japanese POW camp, Merry Christmas, Mr. Lawrence bears some resemblance to The Bridge on the River Kwai in its characterizations of the British and Japanese characters. The British are reserved even while undergoing torture while the Japanese are merciless. In regards with The Bridge on the River Kwai, it was from a British perspective. Maybe Oshima was just following conventions?

Back to Bowie for a moment. This was made at a time where his potential as an actor was starting to be considered more seriously. (He had just done a run on Broadway in The Elephant Man when he was cast in this.) His work in Merry Christmas, Mr. Lawrence proved that he could act if he had the right script.

Indeed Merry Christmas, Mr. Lawrence doesn't have the shock value like some of Oshima's other films but that's not the point of it. It's a depiction of war and its two sides.

My Rating: ****
Posted by MovieNut14 at 11:25:00 AM
Email ThisBlogThis!Share to TwitterShare to FacebookShare to Pinterest
Labels: 1980s, movies, reviews