The Sword and Sandal Blogathon 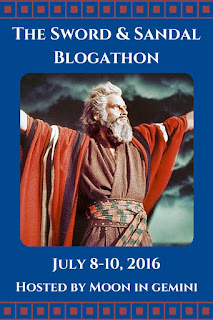 Debbie of Moon in Gemini is hosting a blogathon covering the many epics that dominated the movie theaters throughout the fifties and sixties. Having only seen a select few of this particular genre, I opted for a more unconventional title. Which one was it?


Having seen this for the first time only a few months ago, I wasn't expecting too much from this. (Okay, except for it to be worth my time.) So what did I think of it? Well, that starts after the jump.

It doesn't take long for The Vikings to establish itself as, quite frankly, a bit silly. But the fact it boasts the likes of four actors who were recognized by AMPAS a collected total of six times, surely it has to be better than it looks. (Spoiler alert: it's not.)

Not long after earning his third and final Oscar nomination for Lust for Life, Kirk Douglas is clearly having a ball devouring the scenery in The Vikings. (You'd certainly never suspect him of starring in Paths of Glory the year before, that's for sure.) Honestly, there's a very ill-advised drinking game from how often he bellows his lines.

Tony Curtis' career was certainly looking up by the time this was made. Though Sweet Smell of Success was anything but a success upon its initial release, his work did prove he was capable of more than being the good-looking leading man. (Though he is absolutely gorgeous here.) That said, his work here can basically be summed up as just another paycheck for him. (Oh, the limits a thick Bronx accent can impose on an acting career.) No matter; he had The Defiant Ones that year as well (and got his only Oscar nomination for it too).

Ernest Borgnine has had his fair share of work of varying qualities throughout his lengthy career. Not long after his success with Marty, he got the usual treatment that’s par for the course for recent Oscar winners: getting parts in otherwise forgettable projects. And boy, The Vikings is no exception. (At least he had a couple of better projects in the coming decade.)

And then there's Janet Leigh, the sole actor of this quartet who took the script a bit too seriously. (Then again, actresses didn't always get the best of roles back then.) Being the third of five films she starred in with then-husband Curtis, most of her scenes have her alongside him, complete with some eye roll-worthy dialogue. (Thank God Touch of Evil was also released that year, otherwise her whole career would've been shrugged off by current moviegoers.)

There is one perk of this otherwise cheesy project: cinematography by Jack Cardiff, who was responsible for shooting other films like Black Narcissus and The African Queen. As proven by the rest of his oeuvre, Cardiff captures some indelible images here. (There's a reason for why he’s often considered the best cinematographer of Hollywood's Golden Age.)

Anyway, The Vikings is good for something to pass the time. (Or if you just want something playing in the background while you're working.) It has its perks, certainly (i.e., Curtis being sheer eye candy), but overall you're better off trying to find some of the other films the stars did that same year. (As for Fleischer, try to seek out his follow-up film Compulsion.)

Posted by MovieNut14 at 8:41:00 PM
Email ThisBlogThis!Share to TwitterShare to FacebookShare to Pinterest
Labels: blogathon/meme