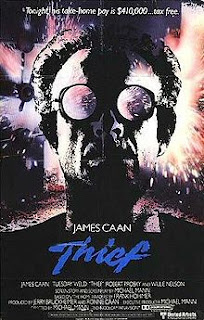 Two of Michael Mann's best received movies, Heat and Collateral, are Los Angeles-set crime movies that rely more on people in the movies rather than the crimes committed in the movies. They may not be everyone's cup of tea, but there's no denying how good they are.

Mann's film debut Thief is no exception. It takes the now-tired cliche of the skilled criminal doing one final job, and shows it as if it were brand new. That's a good thing, mind you.

James Caan, in his best work since The Godfather, is absolutely electric as thief Frank. Like Sonny, Frank is more concerned about getting the job done. (Getting the job done and not get caught in the process is for his partners in crime to take care of.) But that doesn't mean he's sloppy with his work. He gets every detail about the location he's robbing down to a T.

Thief is really good. Hard to believe that this was Mann's first foray into film. Like Heat and Collateral, it's all about character rather than crime. Personally, I think Mann's the only one who can do it without overdoing it.