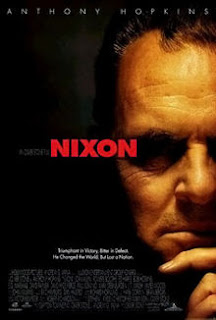 Oliver Stone is no stranger to controversy. He made World Trade Center when the wounds of 9/11 were still healing, W. was released when George W. Bush's term was ending and JFK ventured into one of the biggest conspiracy theories in history.

Nixon isn't any different. As the title implies, it focuses on disgraced president Richard Nixon. It chronicles the many events of his life, from his childhood to his campaigns to his public disgrace following Watergate. Anthony Hopkins portrays Nixon not as a man of power, a pariah or a martyr, but as a man with visible flaws.

One of Hopkins' more vulnerable moments is towards the end after the weight of Watergate comes crashing down on him. His defenses have been broken down, his allies now his enemies, and now he is far from being the man that he was earlier. Just for a brief moment we sympathize for a man who lied to his nation.

Nixon is a very good movie that has its principal actors playing their parts well, though I would probably love it had Stone made it just a little shorter. (Three plus hours? No way.) Still, it's quite good.

My Rating: ****1/2
Posted by MovieNut14 at 11:17:00 AM
Email ThisBlogThis!Share to TwitterShare to FacebookShare to Pinterest
Labels: 1990s, director: Oliver Stone, movies, reviews