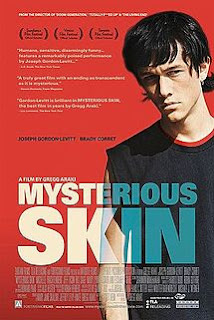 Joseph Gordon-Levitt is someone I've always liked. His work in (500) Days of Summer reminded me of Jack Lemmon in The Apartment. Gordon-Levitt is also well versed in dramas, as shown with Brick and The Lookout.

Of the movies I've seen him in, his best work is in Gregg Araki's Mysterious Skin. As the movie progresses, we get a good glimpse of his personality as layers are peeled away like an onion. We see that he keeps his emotions and his past bottled up and hidden, hoping no one will find out about either.

His most vulnerable moment is after an attack on him. Alone, badly bruised and bloody, the memories of his past come rushing back, consuming him. He now knows of the extent of the damage on him. It's a scene I don't think anyone else could have done so well.

Mysterious Skin is a very good movie, but it's a very hard watch as well. It feels like a mix of My Own Private Idaho and Requiem for a Dream. But it's a good character study to better understand how victimizing abuse is. Watch it with caution.

My Rating: ****1/2
Posted by MovieNut14 at 4:48:00 PM
Email ThisBlogThis!Share to TwitterShare to FacebookShare to Pinterest
Labels: 2000s, movies, reviews