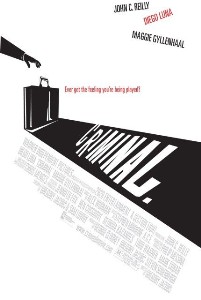 Sometimes the best movies are those that most people ignore. Seriously, some of the most highly regarded classics were commercial failures upon their release.

Take as an example Criminal. How could a crime movie starring recognizable names like John C. Reilly, Diego Luna and Maggie Gyllenhaal get overlooked? Maybe poor publicity, maybe it just didn't appeal to everyone. Either way, it shouldn't be overlooked.

Perhaps the reason for why Criminal is so slick is because it's co-written by Steven Soderbergh (using the pseudonym Sam Lowry). Anyone who's seen any of the Ocean's movies can see that those movies had an influence on Criminal.

I love how instead of spanning the crime's plotting over a period of days, it takes place in a period of twenty-four hours. And if I wasn't clear enough, this is one slick movie.

My Rating: ****1/2
Posted by MovieNut14 at 2:44:00 PM
Email ThisBlogThis!Share to TwitterShare to FacebookShare to Pinterest
Labels: 2000s, movies, reviews