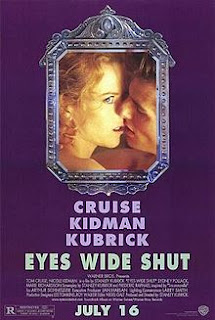 Although I've seen a few of his movies, I'm not entirely won over by Stanley Kubrick. He's a very good director, but his movies take some time to absorb.

Eyes Wide Shut is no exception. Like several other Kubrick movies, it explores the mental deterioration of man (with the occasional sexual reference). I like how the story is set during the Christmas season when the tale isn't exactly cheerful. I mean, really. What better way to celebrate the holidays than through thoughts of infidelity?

And also like several other Kubrick movies, Eyes Shut Wide was no stranger to controversy. (Is there one movie of his that didn't?) Personally, I find that it wasn't needed. Believe me, there have been other movies that are a lot kinkier than Eyes Wide Shut.

An interesting note for Kubrick to end on. I thought that this was very good, a far cry from the usual consensus it receives. It has the usual Kubrick themes and motifs, though the darker ones were a bit of a bother to me. Still, it's worth checking out.