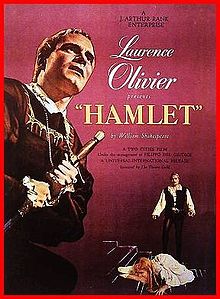 I'll admit it. I'm one of those people who doesn't "get" Shakespeare. Look, I read Romeo and Juliet back in high school but even with SparkNotes, I still couldn't fully grasp it. In short, I rather watch the movie than read the play.

Believe me, I tried to read Hamlet but I couldn't get through the first act. I opted instead to see Laurence Olivier's take on Shakespeare's famous play. Safe to say I got through the movie easier than the play. That's because Olivier's direction makes the story flow with great ease.

Of the many excellent performances, my favorites came from Olivier as the tormented Hamlet, and Jean Simmons as the doomed Ophelia. A scene I liked between both of them has, minus Simmons' narration, no dialogue. It relies mostly on Olivier's mannerisms rather than his words. And I must say, it's quite a romantic scene.

Hamlet is fantastic. Personally, I think it would make Shakespeare proud knowing that his work was in such care. And it's safe to say that this rightfully earned its Best Picture Oscar (and Olivier's win for Best Actor).

My Rating: *****
Posted by MovieNut14 at 8:56:00 AM
Email ThisBlogThis!Share to TwitterShare to FacebookShare to Pinterest
Labels: 1940s, movies, reviews