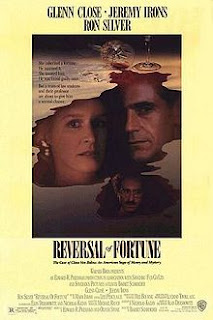 I love movies. I love criminology. Combine the two and I am a happy girl.

Reversal of Fortune is about the Claus von Bulow case, where he tried twice to murder his wife Sunny. (The second attempt landed her in an irreversible coma.) The motive: to inherit her fortune. He was found guilty for both attempted murders, but after a retrial he was acquitted on all charges. It makes a person wonder: did von Bulow deserve to walk free?

von Bulow is portrayed by Jeremy Irons as someone who is arrogant, selfish and uncaring about anyone's well-being but his own. When describing the events that led to Sunny (Glenn Close) falling into her coma, he's remote. Is he truly heartless?

I very much liked the performances by Irons and Close, but I wasn't as enchanted by the movie. I found it in some parts to be slow moving. Still, I liked the criminology aspect of it.

My Rating: ****
Posted by MovieNut14 at 11:00:00 PM
Email ThisBlogThis!Share to TwitterShare to FacebookShare to Pinterest
Labels: 1990s, movies, reviews