The Grass Is Greener 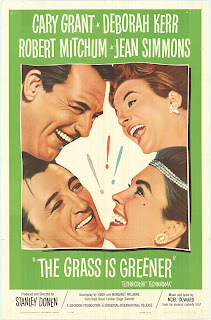 Is it generally a bad thing if I won't watch a movie unless I've heard of at least one actor in it? That's usually the case with most of the movies I've seen, but I wouldn't consider it a major thing.

With The Grass Is Greener, it stars four actors I'm more than a little familiar with: Cary Grant (I saw 11 movies of his prior to this one), Deborah Kerr (5 movies), Robert Mitchum (5 movies) and Jean Simmons (3 movies). And all four play their parts well.

Grant is his usual suave comedic self and Kerr is her usual elegant casual self, but it's Mitchum and Simmons who stand out. You realize that both of them have a sense of humor. I personally liked Simmons the most as the zany friend. And this is the same woman from Elmer Gantry.

The Grass Is Greener is a cute movie, but the slow pace bothered me a bit. Again, I liked the performances but there's not much else to go by aside from that. It's worth a look at least.