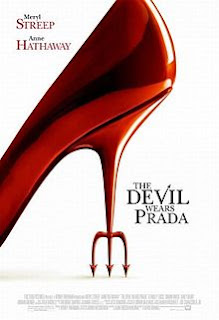 Is there one role Meryl Streep can't do? Probably not considering she has like a million nominations and awards for her acting.

One's thing for certain: Streep can play a bitch pretty damn well, and she showcases that trait in The Devil Wears Prada. Her voice's tone never changes, she always gives an ice cold judging stare, and you can never tell if she's content. Almost makes Bette Davis look like a saint.

I also liked Stanley Tucci, who is practically Streep in male form. He spews out catty remarks like Streep, but he doesn't always mean what he says. He shows some concern, not much but enough to stop you from writing him off as a heel. Tucci is definitely a scene stealer here.

I did like The Devil Wears Prada. I thought it was cute, but that's all I really have to say about it. It feels like the typical chick flick to me, but I might see it again if I need to cheer up.

My Rating: ****
Posted by MovieNut14 at 3:12:00 PM
Email ThisBlogThis!Share to TwitterShare to FacebookShare to Pinterest
Labels: 2000s, movies, reviews