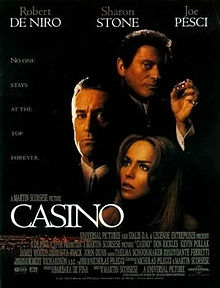 Even great directors have underrated movies. You got Billy Wilder and Ace in the Hole, and Michael Mann and Thief, just as examples.

Of course, Casino is one of the very few movies in Martin Scorsese's resume that gets constantly overlooked. In a sense, it's like Goodfellas set in Las Vegas. After all, both are about men with mob connections that first rise to the top of the world then come crashing down to reality. That they both star Robert De Niro and Joe Pesci doesn't hurt either.

Like Goodfellas, Casino is based on real events. The difference is the narrative changes periodically. It shifts from Ace's (De Niro) calm demeanor to Nicky's (Pesci) profanity-spewing attitude. It may be a tricky move in other movies, but it works wonders here.

Casino is a ridiculously good movie. De Niro, Pesci and Sharon Stone play their roles to great heights. My only complaint is that it's a little too violent, even by Scorsese's standards. (The most violent scene is a toss-up between Nicky stabbing a guy's neck with a pen or Nicky crushing another guy's head in a vise. Either way, they're both fucking nasty.) It's definitely worth checking out.