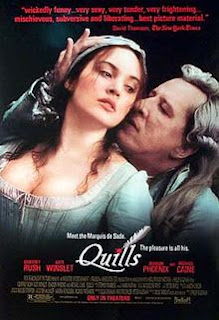 After my viewing of The Lion in Winter not so long ago, I decided to venture into more unconventional period pieces. Ones where the subject matters presented can be related to present day.

Geoffrey Rush and Kate Winslet are the two actors that drive Quills forward. His Marquis de Sade writes, her Madeleine LeClerc delivers his manuscripts and France goes into a frenzy from the publication of his dirty words. They won't allow the asylum's rules of censorship stop them.

The main focus may be on the Marquis de Sade (where the term "sadism" is derived from), but the perverse mind in this movie is from Michael Caine's Dr. Roger-Collard. He's a silent sadist, so to speak. He doesn't show any signs of pleasure when seeing someone in mental or physical pain, but you can tell he enjoys it.

Rush got the awards attention, but my attention went to Joaquin Phoenix. His Abbe du Coulmier is supposed to be a man of the cloth, but he falls victim to a crippling sin: lust. And we see that sin consume him. Phoenix was nominated that year for Gladiator, but he should have been nominated for Quills.

Quills is an excellent movie. It toys with the concept of sex throughout the movie while at the same time garnering top notch performances from the four principal actors. One to avoid? No way.

My Rating: *****
Posted by MovieNut14 at 10:42:00 PM
Email ThisBlogThis!Share to TwitterShare to FacebookShare to Pinterest
Labels: 2000s, movies, reviews