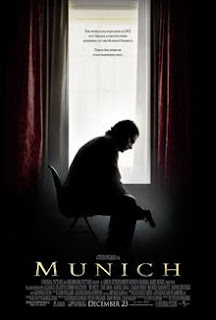 Steven Spielberg, as we all know, can make movies that are either box offices hits (Jaws, Raiders of the Lost Ark) or critics' favorites (Schindler's List, Saving Private Ryan). I like both, but from time to time I prefer the latter.

This is almost an ironic movie for Spielberg to make because in Schindler's List, the lead used bargaining as a way to avert violence. In Munich, the "eye for an eye" belief is used quite frequently. And like the D-Day scene in Saving Private Ryan, Munich opens with a re-enactment of the hostage situation of the Israeli Olympic team.

Eric Bana really impressed me. He shows how haunted he became after of the assassinations he committed. His face becomes gaunt, his eyes sink into his head and he gets increasingly paranoid, fearing that his life will be over by someone else pulling the trigger. He also says this, which sums up his feelings on what he has done: "There's no peace at the end of this. Whatever you believe, you know that's true."

Munich, although slow at the beginning, is an excellent movie. The assassination scenes are full of Hitchcockesque suspense. It may not be as great as Schindler's List or Saving Private Ryan, but Munich shows that Spielberg still has an edge.